Why hello there!  I know I said that I was going to update more regularly, but then I went way too long again. What can I say, between blogging and sewing, I'll probably pick sewing.  Anyway,  I remembered to to take pictures of the new outfit I wore today, and they were not terrible, so I figured I would show you guys.  We'll start with a picture of the outfit: 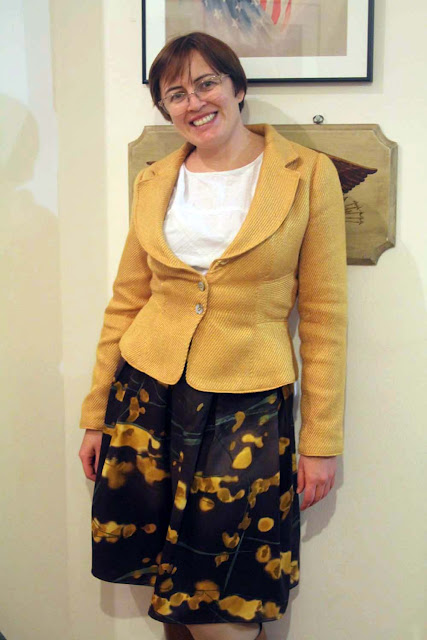 The jacket is a now out of print Vogue pattern, V8707.  I have had this pattern for ages, I think I ordered it during the first sale after it came out.  If you know Vogue patterns, it was the one with the green plaid jacket and matching dress on the cover.  I even hunted up and down for a super similar plaid.  Well, even though I've had the pattern for years, and have cut out the jacket pieces twice, I have never made the jacket.  I think it's likely because there are about a kajillion pattern pieces.  Well, yesterday I was highly motivated.  I had a day off from work for President's day, but both kids were in school, and my husband didn't have anything planned for us to do.  So I decided to get off my kiester and make it. 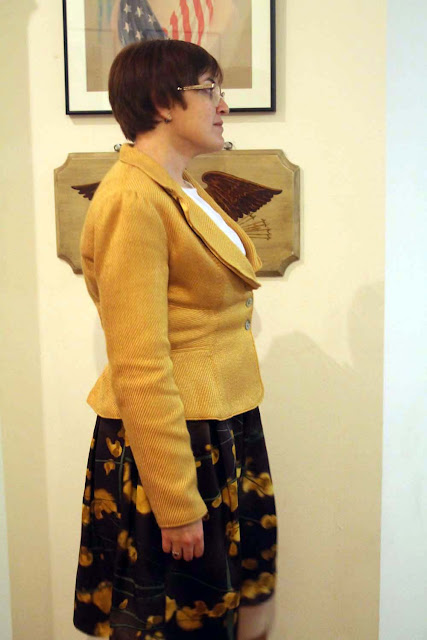 I had cut out the size 14, so that is what I made.  I narrowed the shoulders by taking a 7/8" seam allowance on the princess seam and upper sleeve seam.  I also sloped the shoulder slightly, as I don't use shoulder pads. Other than that no alterations of the pattern.  However, let's discuss fabric.  For many months, I searched for a nice mustard fabric for a suit.  Finally in December, I found something appearing suitable on Gorgeous fabrics, so I bought 5 yards, 2 interfaced and 3 not.  I knew it was a boucle, but I underestimated the unraveleryness of it.  It is yarn that is about an eight to a quarter inch thick woven together.  So, I cut everything for the jacket and the future skirt of out the interfaced fabric.  I am going to likely toss the uninterfaced as it's unusable.  Since it's super thick, I decided the undercollar/lapels and the facings would have to be made in the lining fabric.  To help with the structure, I did interface them. 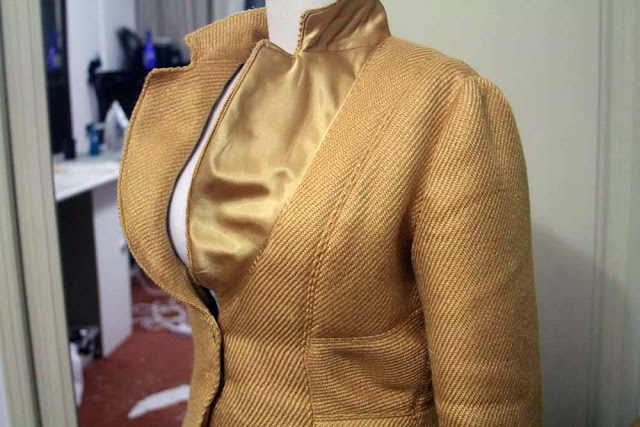 You can see just how thick the individual yarns are in this picture, as well as the undercollar.  Other notes, I top-stitched all the seams.  This provided an extra layer of protection against the fraying (even with the interfacing there was some fraying). 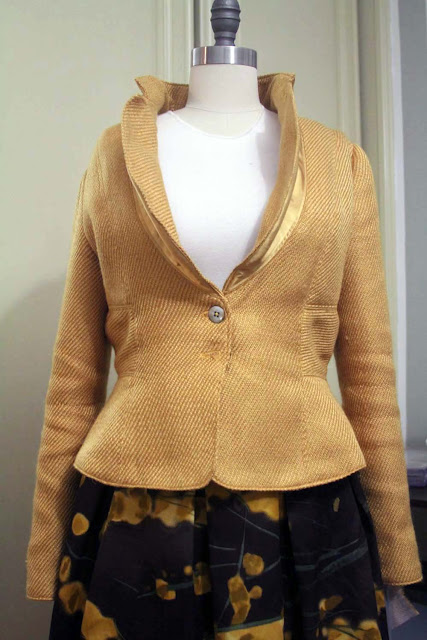 For the closures, I used my trusty mother of pearl buttons.  I had a late start on my work day, so I was able to finish it this morning.  I was pretty impressed with how much I got done yesterday, all I had to do this morning was notching the curves, turn it right side out, iron, hand-stitching, final top-stitching and buttons. 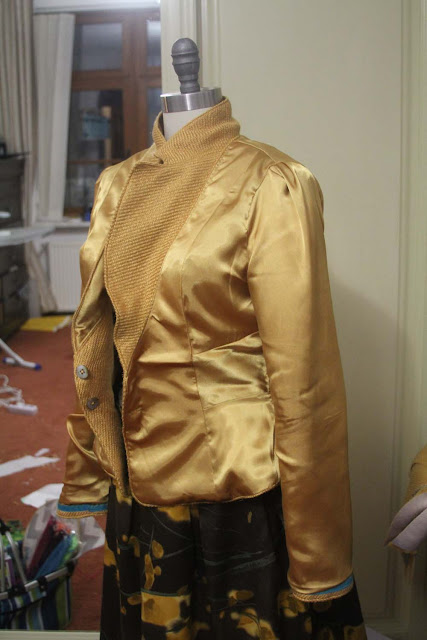 Last note on the jacket, I finished the sleeves with bias binding. I love the pop of turquoise.  Okay, enough on the jacket, on to the skirt.  I made this skirt a couple of weeks ago.  It is made out of one yard of super fancy Oscar de la Renta fabric from Mood. 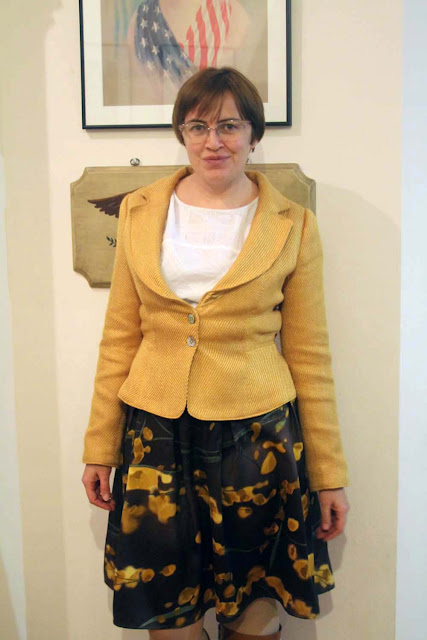 It was super simple to make.  I cut the fabric lengthwise into three sections.  One 3" for the waist facing and the other two equal depths.  I sewed an invisible zipper into one of the seams, sewed the the other seam, and then box pleated.  (Baste them first!)  Once the pleating was done, I used the 3" strip for the facing.  As there was selvage, no finishing needed on it.  The hem is a quarter inch turned up twice. Super quick and fast! 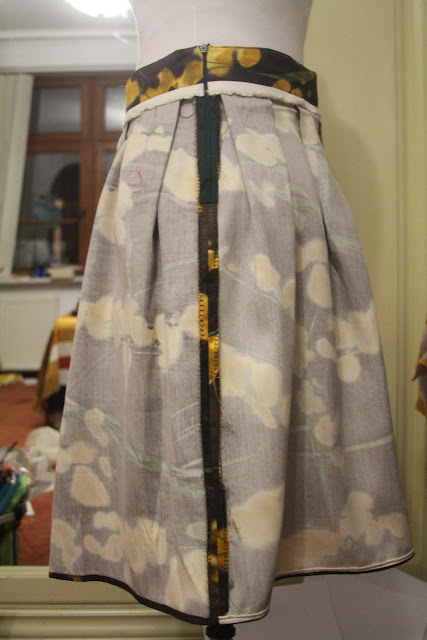 And one thing not sewing related, my little guy turned 3 on Saturday!  Three! Where did the time fly.  Here are obligatory pictures of him.  Anyway, that's all, back to sewing for me.  I still have tons of me-mades not blogged.  Hopefully as the weather gets better, I will start catching up.  Until next time happy sewing! 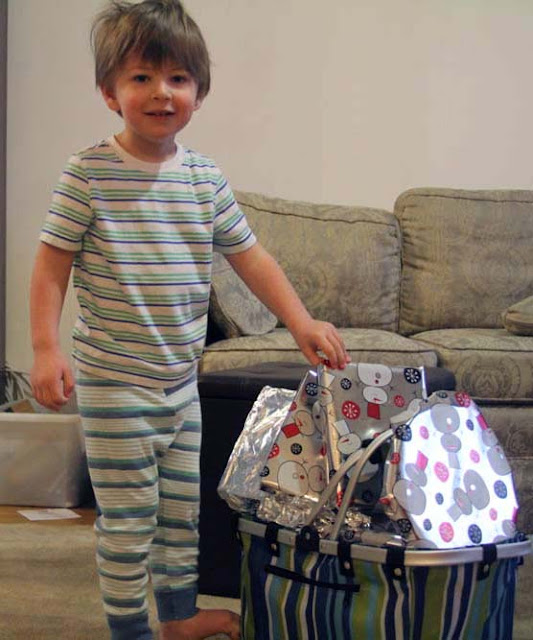 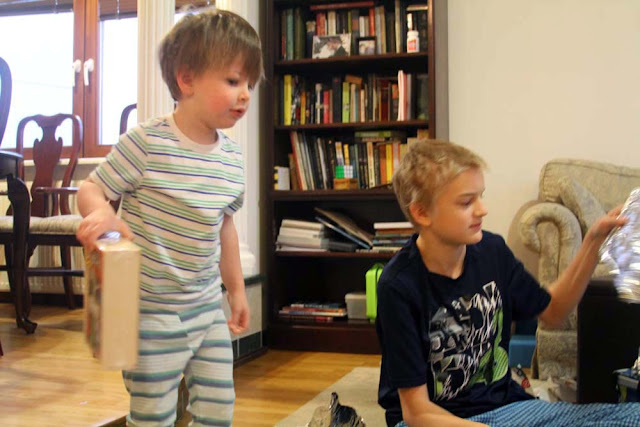 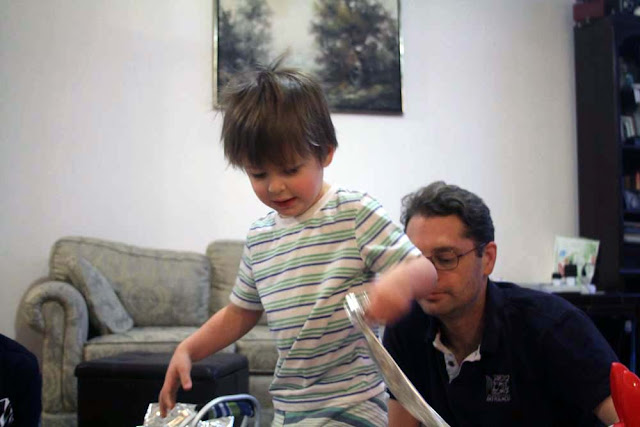 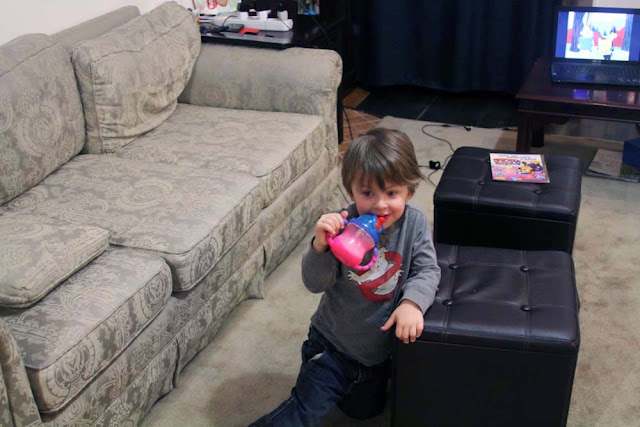 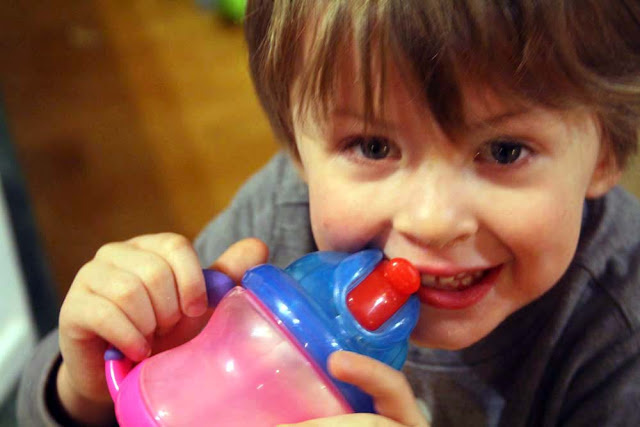