Finally Getting Below 100 yards of Fabric!

I am going to try and keep this short, sweet, and picture heavy.  That's what y'all want right?  It's all about the clothes, less about what I am saying.  Anyway, three weeks ago, I bought 4 yards of tan cotton/poly fabric.  I usually shy away from polyester, and need to remind myself that it's just not worth it.  Out of the 4 yards, I made pleated pants, a jumper, and a pleated skirt.  I was super excited because I sewed three garments in something silly like days.  Then I wore the pants.  It may have been the allergic reaction to whatever it was (laundry detergent or lotion), but they were not awesome to wear.  Long story short, as I was not feeling the clothing, I haven't been motivated to take pictures.  Except for the pleated skirt. 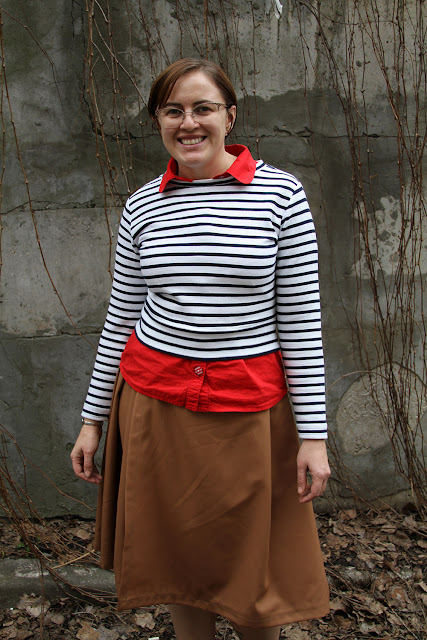 I took photos last Friday right after work, but never got around to writing about them.  I'm still meh about all three pieces of clothing.  They're very utilitarian feeling. That's what I get for compromising on the fabric since what I wanted didn't have enough yardage.  I should have just taken the 1.5 yard of the nice wool and made one of the three garments. We live and learn, right?  The pleated skirt was super easy to make.  I took two 28" pieces of fabric, used the selvages as the back seam and front facings.  I am a lazy pleater- meaning I don't do the tricky math, and just wing it.  These pleats are two inches apart and three inches deep.  They turned out nicely. 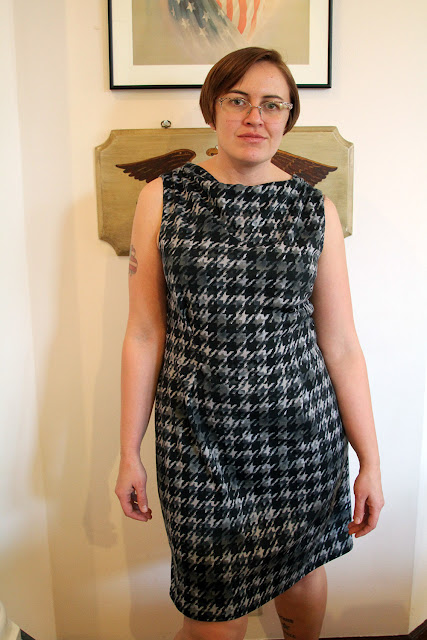 We're not here, though, to complain about fabrics, but to talk about how I'm finally below 100 yards of fabric in my stash.  This dress (Ukrainian Burda magazine October 2015) was the clencher to getting below the number.  I also made this as a black top with some miserable to sew black Swiss knit.  That we will not be taking pictures of.  It is definitely a muslin- wearable- but still a muslin.  I only had a little over a yard of this fabric, so the length was restricted to that. 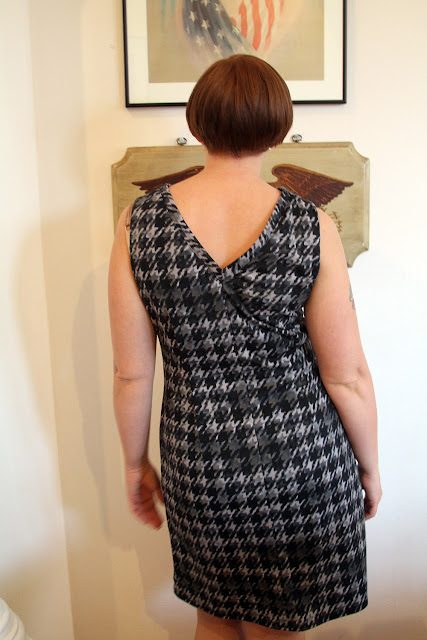 The fabric was super easy to sew.  It was billed as a double knit, bought from Gorgeous fabrics last summer. It feels a little more sweatery than double knit.  It's definitely soft.  I felt like I was in pajamas all day. 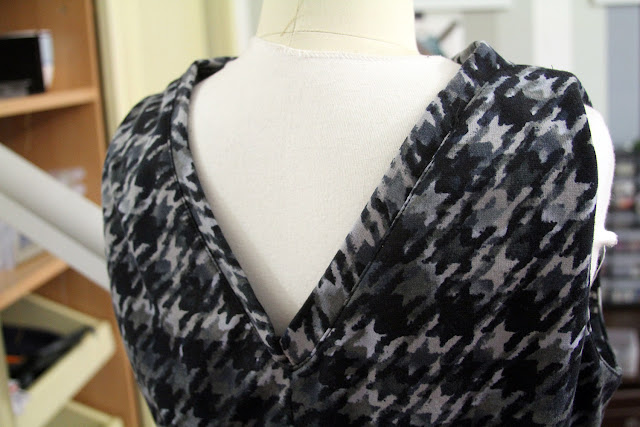 The front cowl neck wraps around to the ribbing (binding?) of the v-neck back.  I trimmed the binding pieces by 5/8" in hope of achieving a flat ribbing, but it appears I could have taken out a little more.  I also raised the armhole by 3/8" inch.  I made a size 40 grading out to a 42 in the hips.  I could have likely gone down to a 38, but I didn't want it to have negative ease.  The pattern is printed, so the negative ease would have meant the white underbelly of the fabric would show through. 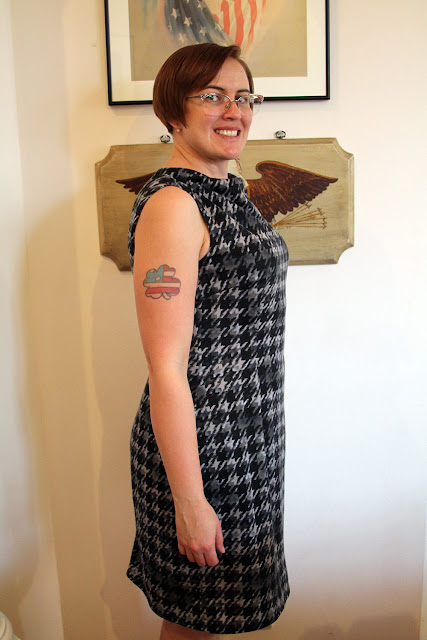 Since my fabric was limited, I only worried about matching the stripe on the side seams.  The houndstooth is busy enough that you can't really tell that they're two broken ones. 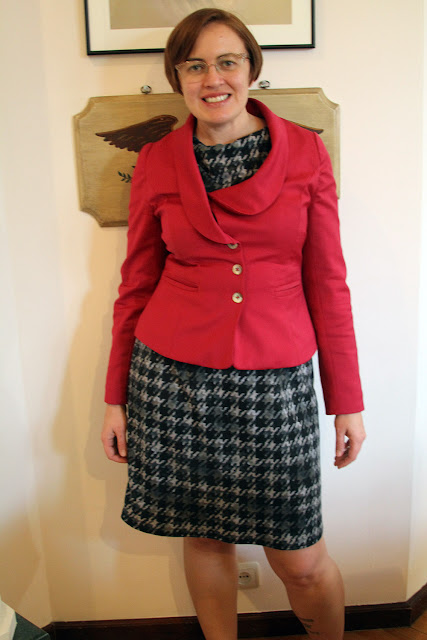 I paired it with my magenta jacket for work. I think it worked out well.  There isn't much else to write about it.  I used the triple-stitch on my machine and then serged the edges. I will leave you with some more pictures of the first skirt and Alex being super helpful today.  I finally got my embroidery bobbin order, so we were winding them.  He also helped sort the colors, and freaked out when we finished.  After all that organizing, I feel like my next project should have some embroidery.  I have about 75 bobbins worth of the thread.  (Alex also prepped the photo shoot- so that's the other picture.)  Until next time happy sewing! 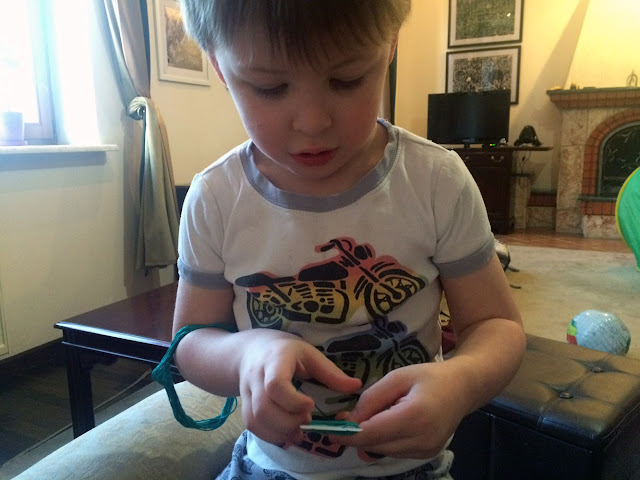 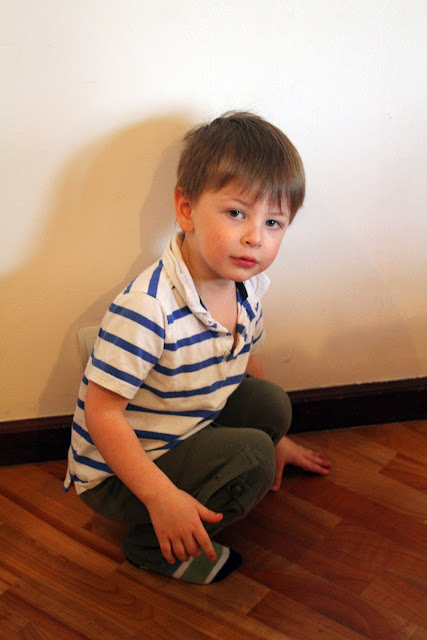 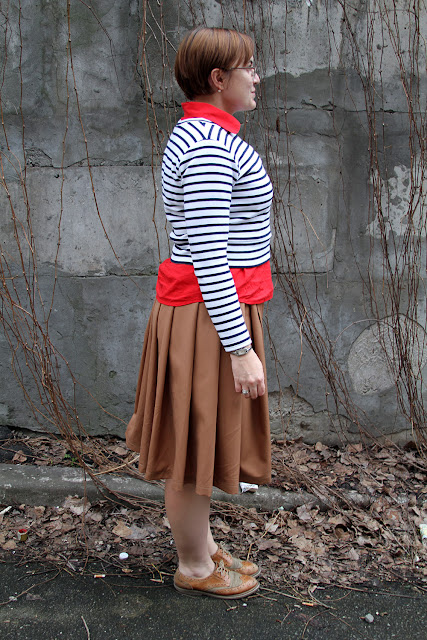 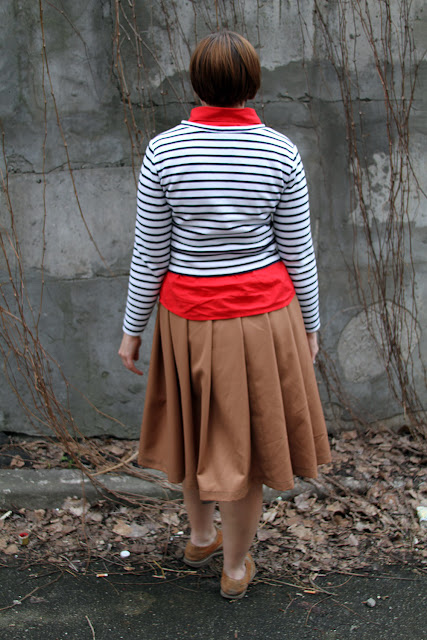 Posted by Nicole at 2:10 PM No comments: