A Gabriola, Vacation, and a Giveaway

I am going to keep this short and sweet because I am using my phone to type this and I am terrible at ' swiping'. Currently, I am sitting in a cabin on the edge of Yosemite waiting for the husband to get ready so we can see the park. We've been in California since monday night, and beside the heat its been lovely. This is the first time he and I have traveled without the kids, since well before the little one came along ( long weekend in Chicago) or way back when we were dating a week in Hawaii. As we had to travel just to get to our wedding (from Moscow to kansas city) we didn't do a honeymoon. So five years later, we finally got one. We go back to KC tomorrow and continue our vacation there with the kids. I also get to make it to DC for some training before we head back to Kyiv. But you're not here for that, so let's get to the skirt. It was my last project before heading out. 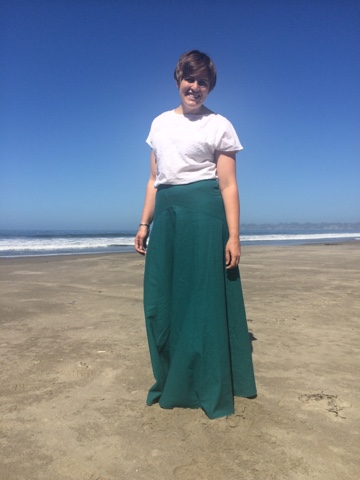 I finally made Sewaholic's Gabriola after having the pattern in my stash for over a year. The fabric is a linen bought at JoAnn's during one our stops in KC in the last couple of years. I think fall 2013. I made a size ten. It grew, so I took several inches out of the sides. 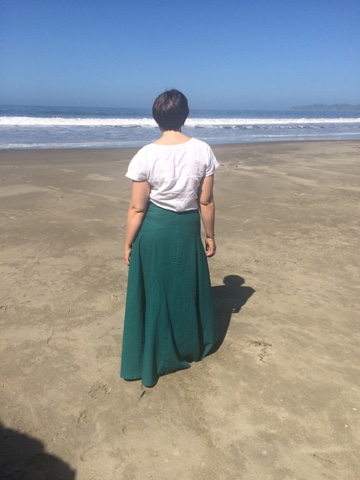 Once done, I tried it on and it was still too big. The waistband was already topstitched, and I had run out ofthe turquoise thread, so I had to put in darts. They are at the side seams, so they aren't noticeable, I hope. 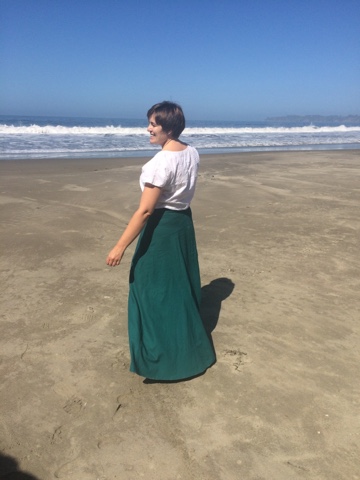 Other than that it was a super straight forward make. The only change for next time would be to interface the chevron pieces, as they are now, they stretch too much.
Ok, i promised a giveaway. I don't have any pictures because my mom moved the fabric somewhere, and I couldn't find it before we left. But I have two Ukrainian fabrics to giveaway to one lucky person.
If I remember correctly they are the same or similar to what I gave away in December. To enter leave a comment here with a way to contact you, and let me know what me made item would you bring on vacation. The giveaway ends August 2 at midnight CST. Until then happy sewing!
Posted by Nicole at 10:01 AM 3 comments: 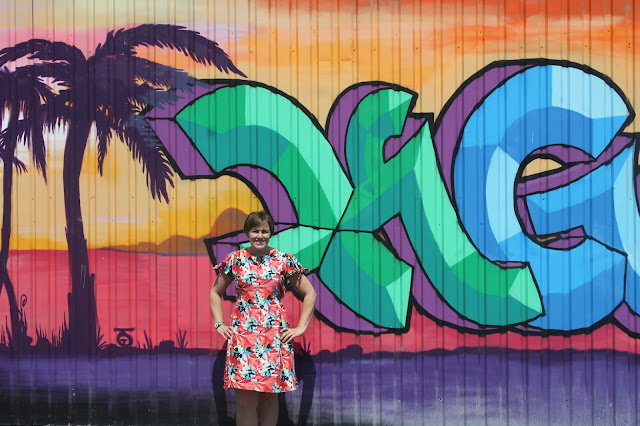 The problem I have with summer is that it brings out the lazy in me.  It's hot.  We don't have central air conditioning, so the apartment is never quite cool enough.  I end up sitting on the couch fuffing around on the internet or reading a book.  My sewing suffers immensely during the hottest months.  A couple of weeks ago, I got inspired to make a summer dress.  I wavered for two or three days on what pattern to make.  I even traced a Burda pattern, but when I went to cut it- I just couldn't imagine it.  I finally settled on a pattern I already cut out- the Sally Shirtdress. 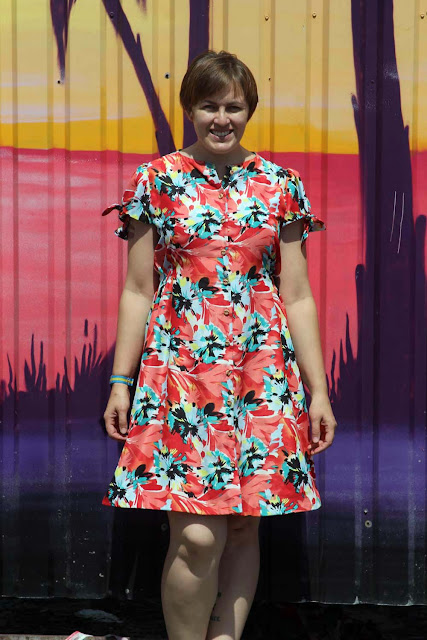 For this version I used a rayon/vicose I picked up in Sao Paulo.  It was slightly sheer, so I underlined it with the cotton/silk batiste that I bought last month.  As you can tell it doesn't look a whole lot like the Sally Shirtdress.  After I sewed the collar and the sleeves, I tried it on.  The sleeves had zero ease built into them, so they were way too tight.  The collar didn't stay up.  It looked terrible.  Here is what it looked like with the collar (but without the sleeves): 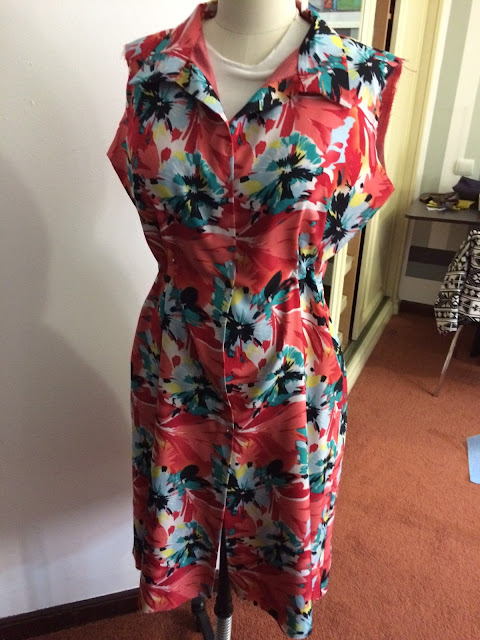 I hated that the underlining showed.  So I picked up my seam ripper and unpicked the sleeves and collar.  Then I hung it up on the dressform and let it sit for a couple of days.  While it was sitting, I finished another pair of pants that I had set aside earlier as I wasn't happy with either. 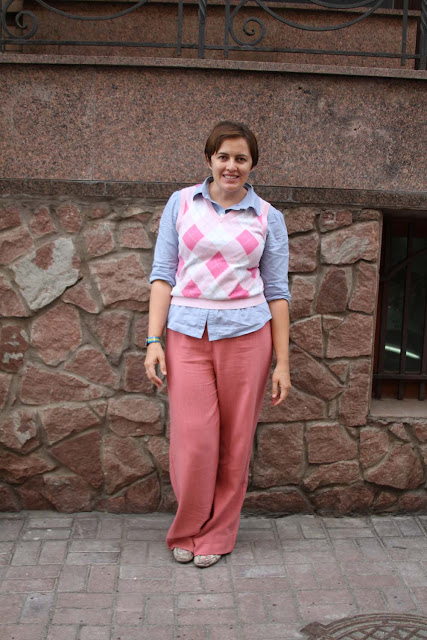 I am still not sure about them, they're comfy and fit well in the back, but they look a little frumpy.  Anyway, back to the Sally Shirtdress.  I left off the collar, finished it with bias binding, but needed a new sleeve.  Something didn't take up too much fabric because I only had about a quarter yard left.  I flipped through my patterns and settled on the sleeves from Simplicity 1872 by Cynthia Rowley. 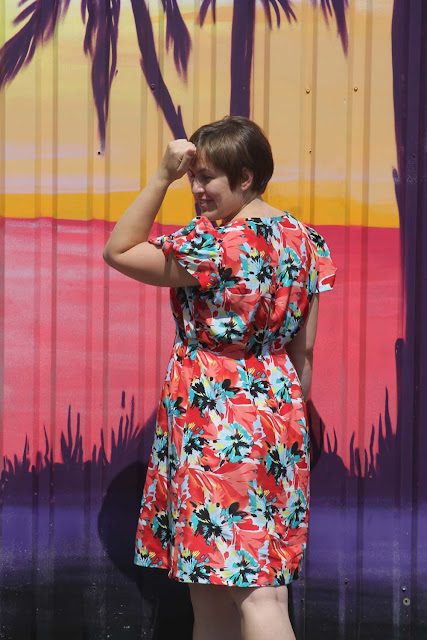 The other change I made, was moving around pleats.  Instead of the four inch pleats (two inches above the waist and two inches below), I did pleats that were only a inch long.  This created the blousing effect I was after. There are six pleats in the back, but only four in the front.  Anyway, that is about all I have to say about this dress.  I wore it twice this weekend, and it was nice and cool each time.  I will say that after almost a year of being out of Brazil, it took me a little bit of getting use to wearing such a vibrant dress.  Anyway, I have almost finished a Gabriola skirt, so I better get on with it, so I can do one more post before I go on vacation.  Until next time, happy sewing! 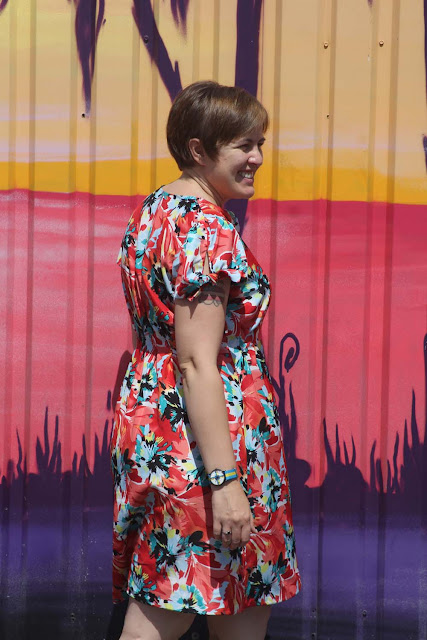 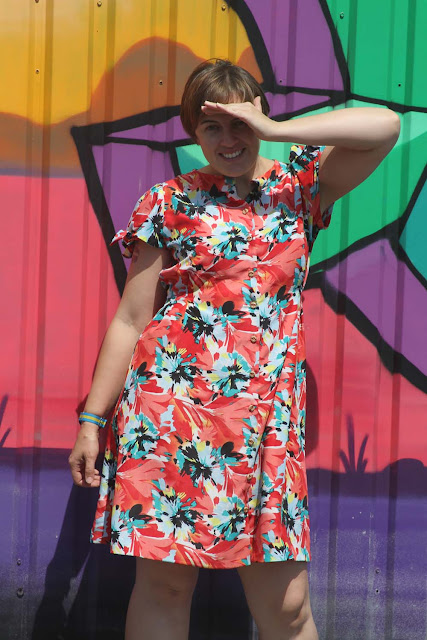 Posted by Nicole at 2:03 PM No comments:

As we've been discussing the last couple of blog posts, I have been working hard on my Fourth of July Party outfit.  I finished in earlier this week, in time for the official party, which was on Thursday.  I wore it today as well, since it was really Independence Day, and I had another party to go to.  It garnered many compliments, and was super comfortable.  Which is a must since on Thursday, I was working outdoors for six hours in the rain and heat. 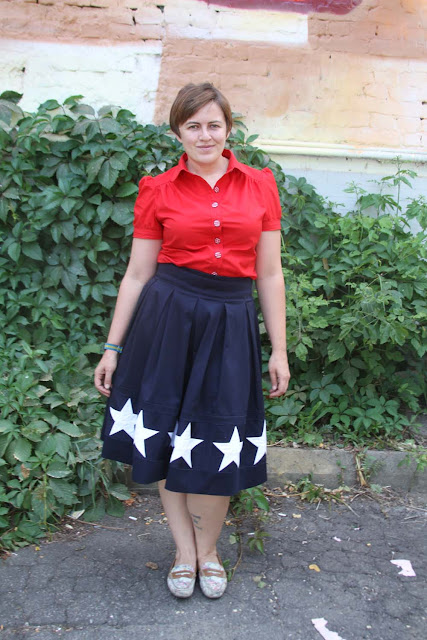 It could only be more patriotic if I had found the perfect red and white striped knit to make a jacket.  Next year...  Anyway, let's get to the nitty gritty, the button down is another McCalls 6649, with the yoke altered to come to the front and the darts turned into gathers.  The sleeves I took from a New Look pattern, 6078, I think.  Oh, and I also curved the corner of the collar.  Is it still really McCalls 6649, when there are so many changes? 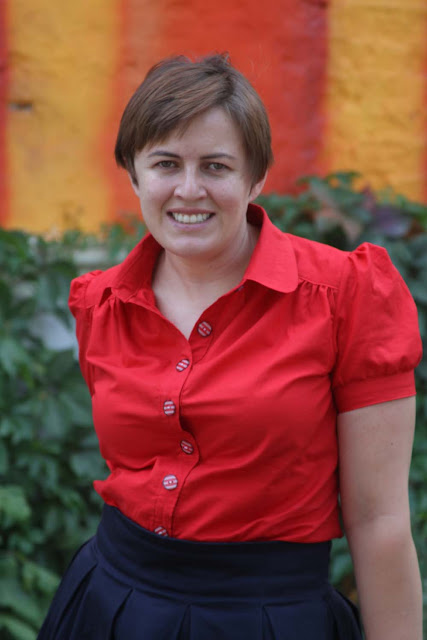 A closer look at the blouse.  Look at all that gathering.  Instead of interfacing, I used an extra layer of the fabric in the collar, button placket, and sleeve band.  The buttons on the sleeve band are in the back, which is a little odd, but that's how it said to get them done. 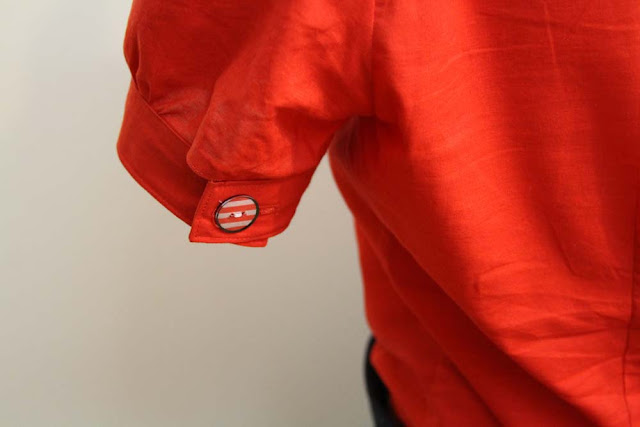 I kinda like it though.  It gives a little bit of interest on the back of the blouse.  The fabric is a red cotton lawn that I got at the local fabric store.  It is a rather crisp hand for as thin as it is.  It makes a rather nice looking shirt right?  All the seams are french seams, so it looks just as nice on the inside as out.  I also used a lot of glue stick to make sure the plackets, bands, and collar were easy to topstitch.  As this is my fourth iteration of M6649, it came together without any issues. 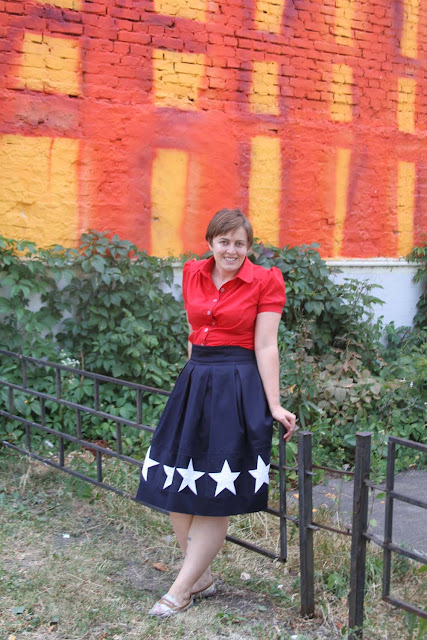 On to the skirt.  I've previously talked about quilting the stars.  The rest of the skirt is deceptively simple.  It's a bunch of rectangles sewn together and then pleated.  I winged it on the pleating- they're three inch pleats that are six inches deep, but I think one ended up being five inches deep, and then the ones next to the zipper are random sizes too.  But it fits and that is what matters. 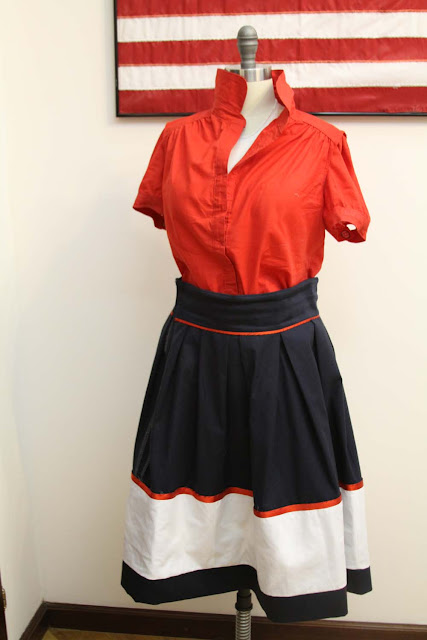 Here is a look at the inside.  It is not lined, but finished with a facing on the top and at the hem.  The hem facing is something like 10 inches deep.  It covers all the raw edges though, which is what is important.   I used red bias binding to finish the edge facings, and then slip stitched them down.  I like the look of the stripes and might use it for another skirt. 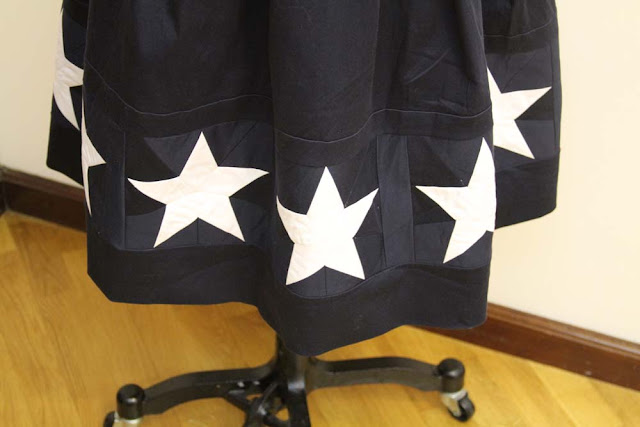 A closer look at the stars.  There are thirteen of them, one for each original colony of the United States.  On a side note, the Betsy Ross flag is my favorite of all the flags.  So much so, that I have a framed copy of it hanging as artwork.  Makes a great background for a patriotic outfit right? 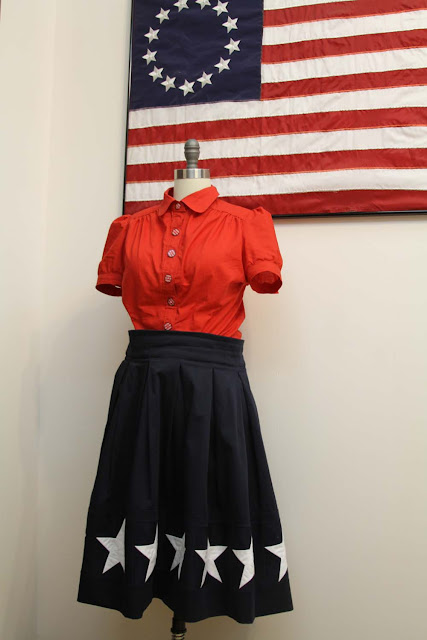 About a month ago a new mural popped up by my apartment, which is what we used as a background for the photo shoot.  Here is a look at the actual full painting.  I am tiny compared to it. 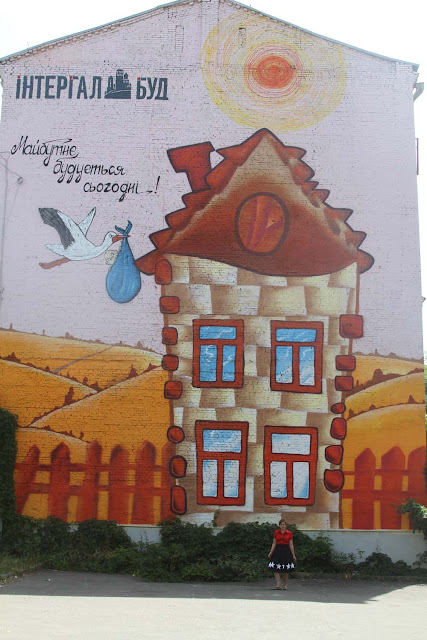 There are a couple other ones near by that are really cool too.  I should get around to taking my camera so I can show you those as well. Anyway, next up on my plate is my dear husband's leather jacket.  The pattern making for menswear book came, so I have no excuse!  On that note, Happy Independence Day and Happy Sewing!

Posted by Nicole at 2:05 PM No comments: