Today I almost finished my shirt for my work's Independence Day party. All that was left were buttons and button holes. I searched my stash for appropriate buttons, but nothing looked right. Understandably so as I hardly ever make anything red. 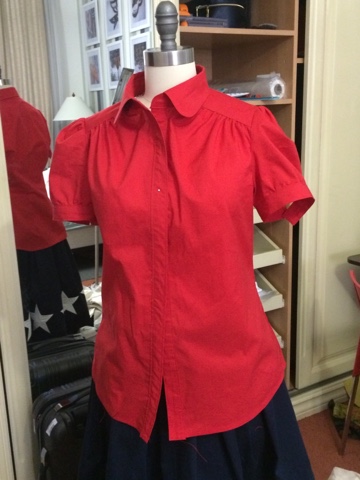 So I did what any normal person would do, decided to make my own buttons. I wasn't sure I could match the red, so I didn't want to do plain ones.  I decided stars would be too crafty and a pain in the you know what to do. So i thought maybe stripes would work. 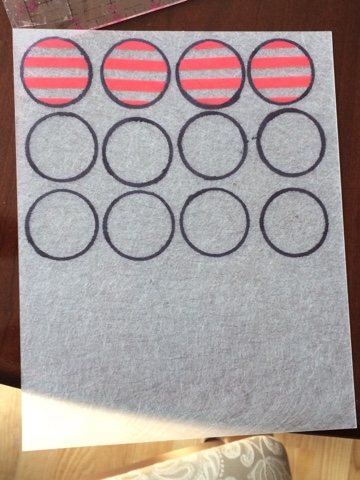 I used a large Gutterman thread spool to draw my circles with a navy sharpie. The stripes are done with a red/orange paint pen. I used frosted shrinky dink paper. Size wise I wanted 5/8ths of an inch so the starting size needs to be three times that. The stripes are 1/4 of an inch. 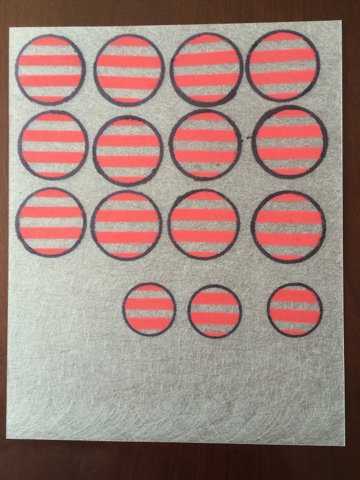 I realized that 5/8ths of an inch might be too big for the collar and cuffs, so I made three that were slightly smaller. 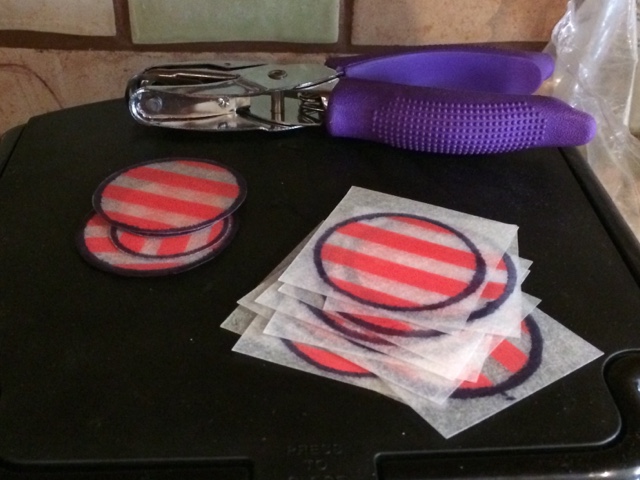 Next, I cut them out. I used my paper cutting shears. You need sharp scissors so get a clean edge. 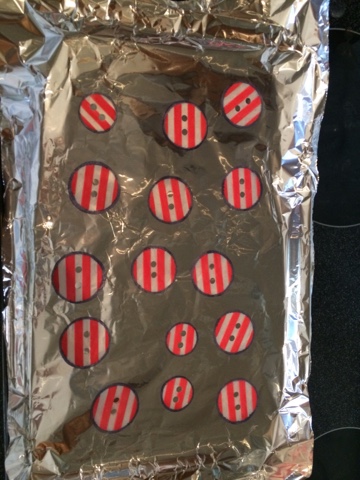 Once they were cut out, I colored the edge with the sharpie and punched the holes. I did my best to center them fir better or worse. 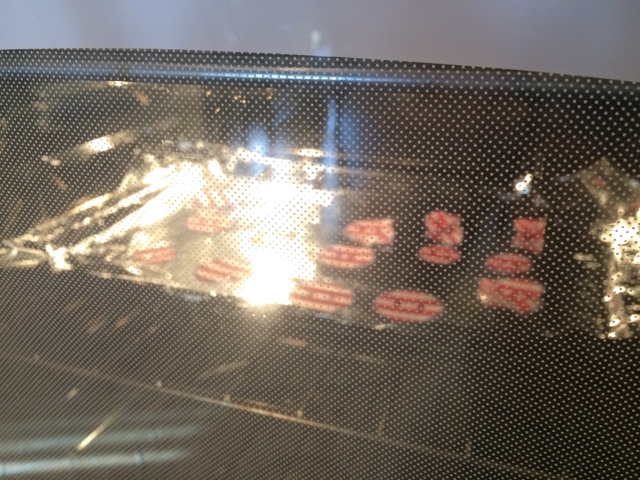 To shrink them you put them in an oven ar 325 degrees Fahrenheit. I love watching them shrink. I think you could make some interesting sculptures by pulling them out mid shrink. 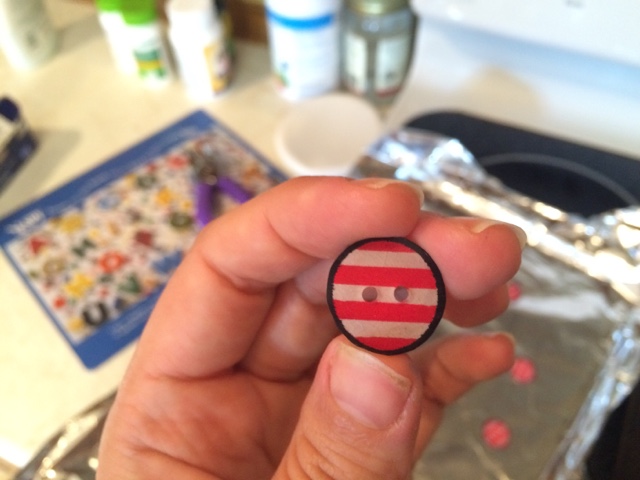 After a minute or two you pull them out and let them cool. Turns out my circles were more ovally. Oops! 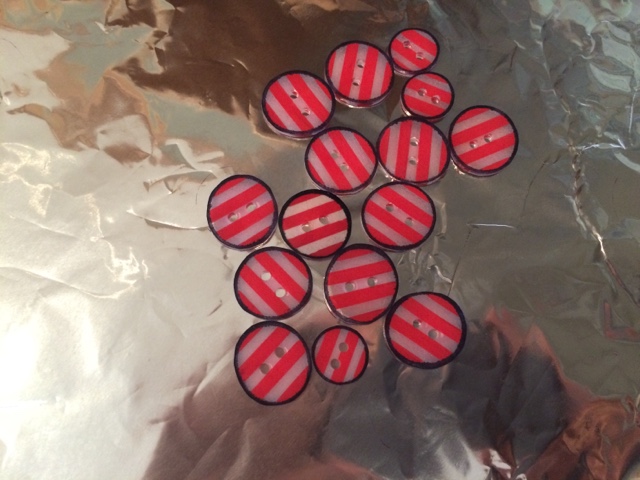 Here they are all together. The one that is brighter is facing the right way. The others are with the wrong side up. 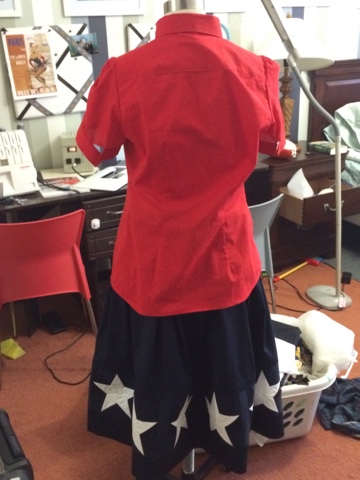 Here is a look at my outfit.  Well the back anyway. I'll show the final project later this week. Hopefully I can get some pictures of it in action. Until then, happy sewing!
Posted by Nicole at 12:07 PM 1 comment:

Just a quick post today.  What collar should I put on the shirt?  I am thinking collar stand+ rounded collar (not quite Peter Pan, but getting there).  Leave me a comment and help me decide. 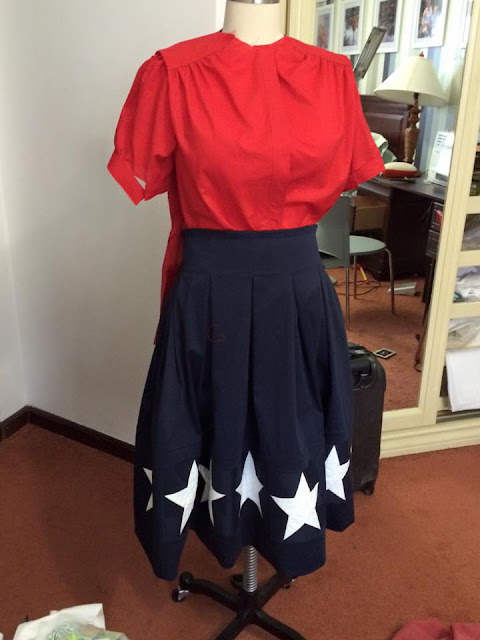 Oh and I am thinking of some shrinky dink star buttons.  Too much?
Posted by Nicole at 8:53 AM No comments:

Gingers Round Two and a Sneak Peak

Why hello there, it's been awhile.  I haven't been very motivated to blog over the last two (three?) weeks, mainly as I have been super busy.  Between work trips, my parents, and actual trips, there hasn't been a whole lot of extra time to take photos, edit photos, try and be slightly witty and write something.  There has been some sewing.  I have made two pairs of Iris shorts by Colette Patterns, neither are my favorites, but they certainly wearable, and get frequently worn.  I have also made these: 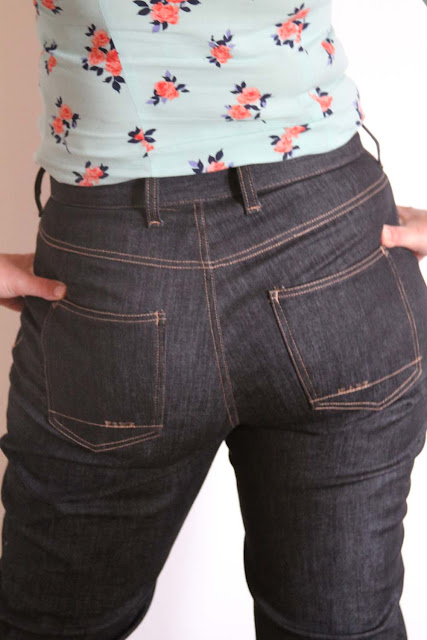 Yes another pair of Ginger jeans.  If you can't read the wording on the pocket, it says home made.  Which makes me laugh.  The only thing I did was add 1 inch to the front rise tapering to a half inch in the back.  Which means they sit where they were promised to sit! 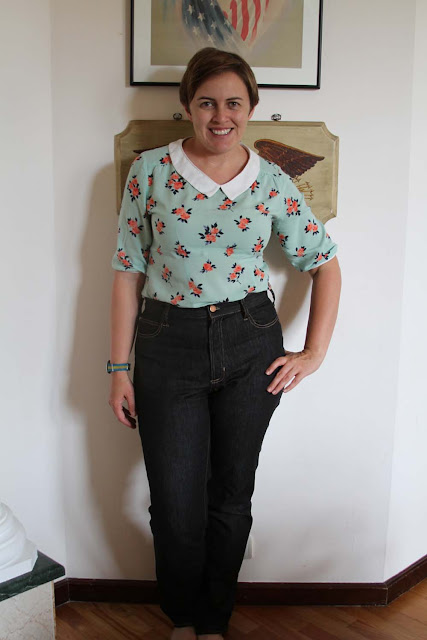 I've worn them many many times over the last couple of weeks, and it appears that I could tweak the fit just a little bit more.  They are a little in the butt/thigh area.  I also could lose a half inch in length in the upper back thigh (I think in the new version of the pattern, this is done for you.)  Of course this means there will be another pair. 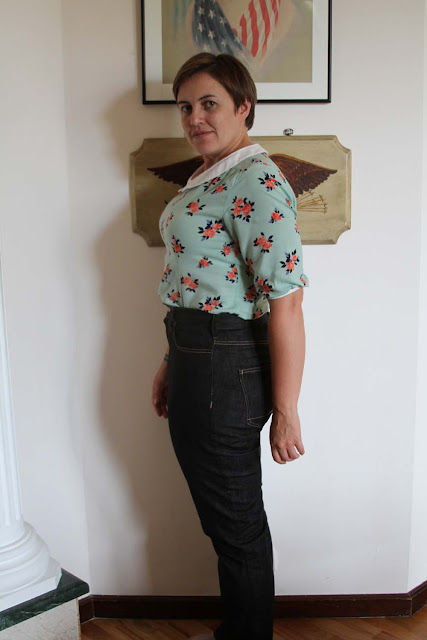 Here is a side picture.  You can see that they are a little bit loose as they are wrinkling.  I topstitched but didn't use the rivets, because I couldn't find the rivet tool.  I bet the little guy lost it.  So that's that, some new jeans.  Now onto what I am working on right now. 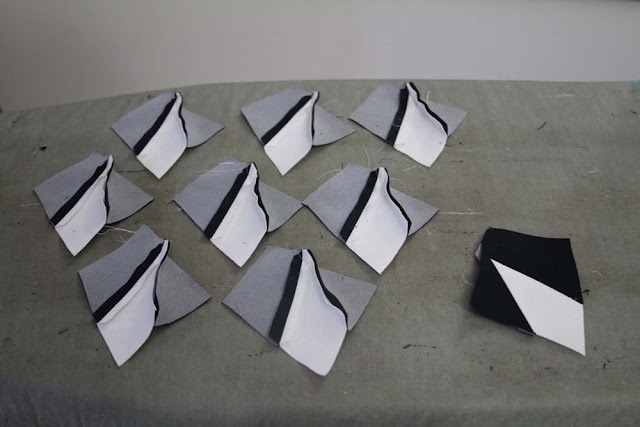 I think I have been bitten by the quilting bug.  After I swore I was done with it, I decided on another quilted skirt.  My work's biggest event is our Independence day party, so I wanted to make an appropriately festive outfit.  However, I was concerned about looking too hokey.  I thought about it for several days, and came up with an idea.  A navy pleated skirt with thirteen stars at the border paired with either a red buttondown or a red/white striped top.  I'm terrible at drawing stars, so I knew I didn't want to paint them.  I found a pattern for a five point star quilt and figured how to make it work for what I wanted. 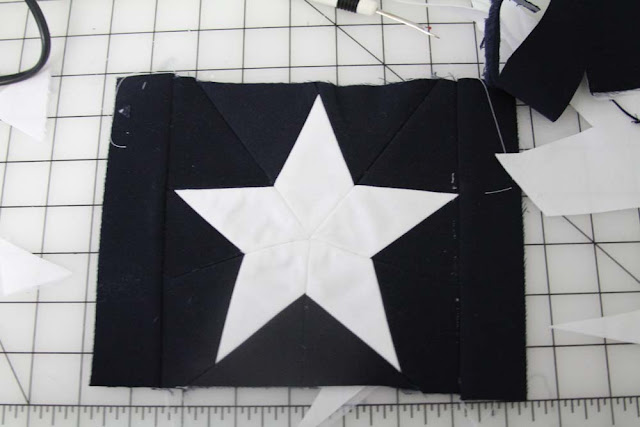 I made the stars over the last several weeks between hanging out with my parents and going to Munich.  It was much much slower than usual because my parents took over my sewing room AKA the guest bedroom.  But I got them done last week.  This week I have been putting the stars together and started the skirt. 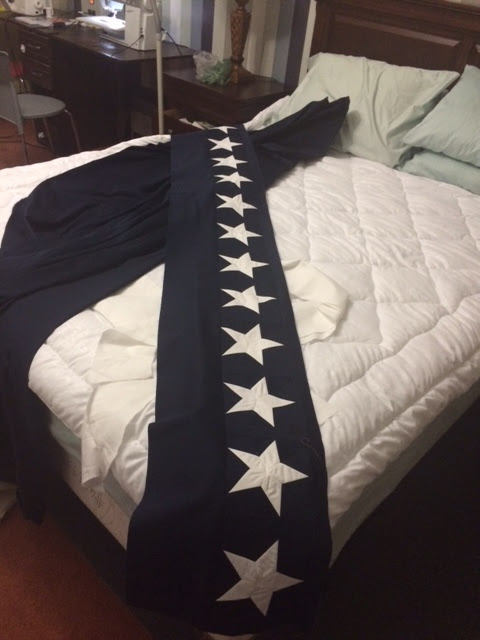 The hem ends up being 94 inches wide.  I have joined all the pieces of the skirt and have hemmed it (by hand).  Now it's time to figure out the pleating math!  I have to work some tomorrow, but I should theoretically get it done.  Then it's on to the top, which I still need to figure out.  I will leave you with this photo: 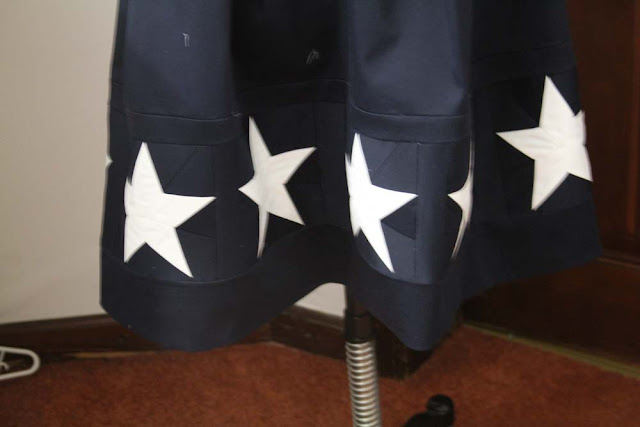 Looking good right?  What do you think for the top?  Leave a comment and let me know.  Until next time, happy sewing!

Posted by Nicole at 2:01 PM No comments:

Wow!  I can't believe I started blogging a year ago (June 1, 2014).  It sometimes feels like a lifetime ago, sometimes feels like yesterday.  I haven't been around posting over the last week or so, but I have been sewing.  I have made three pairs of Iris shorts by Colette patterns, two of which are wearable, but both are still 'wearable muslins' due to fit issues.  Eventually I'll probably blog about them, but when I tried to last week, I had nothing really interesting to say.  I will probably make another pair in the next couple of weeks, but first I need to make another pair of Gingers because my first pair (out of cheapo local denim) have already started to get holes in them.  I may try and patch the holes so I can still wear them around the house, or while painting, or whatevs!

Anyway, let's take a quick look at my first year of blogging.  I wrote 87 posts.  That's a lot of writing!  I reread the posts the other day, and found a couple of typos.  Oops.  I have made a lot of clothing, including four jackets (one of which I have given away), six blazers, one pair of jeans, a couple pairs of pants, three shorts, at least 10 of each skirts, tops, dresses.  Oh yeah, I can't forget the twelve aprons.  I think it evens out to more than one thing a week.  I've entered four contests, and won one of them.

Where do I go from here?  I have gaps in my wardrobe- plain skirts, plain tops, and pants.  I need to start filling in the gaps.  Unfortunately, this ends being boring sewing/boring blogging, so I put it off.  I also have a really interesting idea for some paintings that involve fabric and sewing.  My only hesitation is that it would require me to buy some fabrics, which I'm trying not to do!  I also did finally get my colors read, so I would like to open up the discussion on colors you like to wear versus colors that supposedly look better.  Are there things that you're interested in talking about?  Let me know in the comments!

Well, now to make some dinner and cut out my next pair of Gingers.  I'll leave you with some pictures from my recent road trip to Odessa.  Poppies and cool sky galore!  Most of these were taken out of a moving car window, so they're not the greatest, but I wanted to capture that sky.  Enjoy the pictures, and until next time happy sewing! 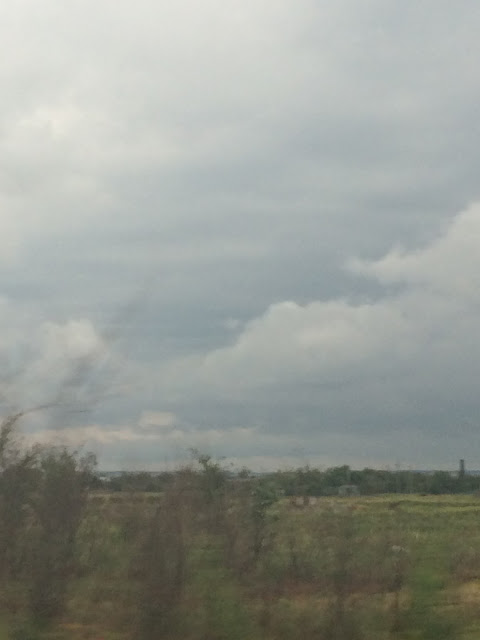 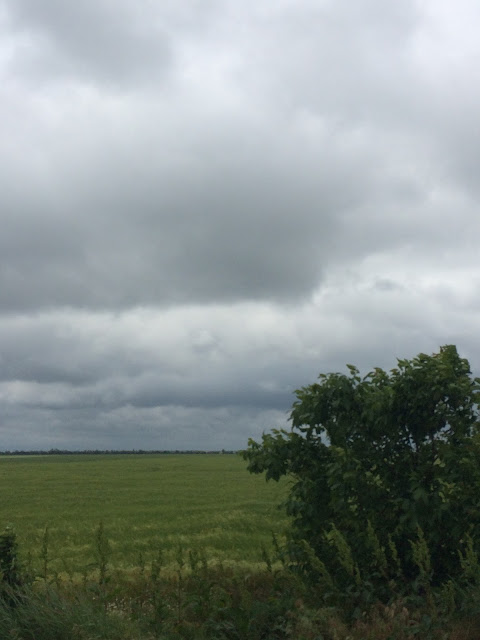 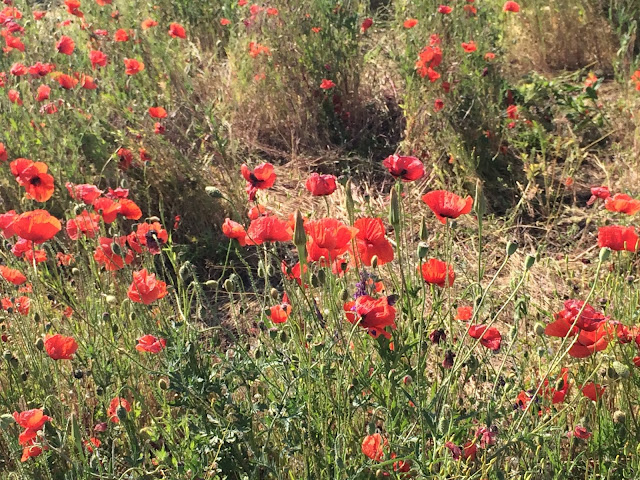 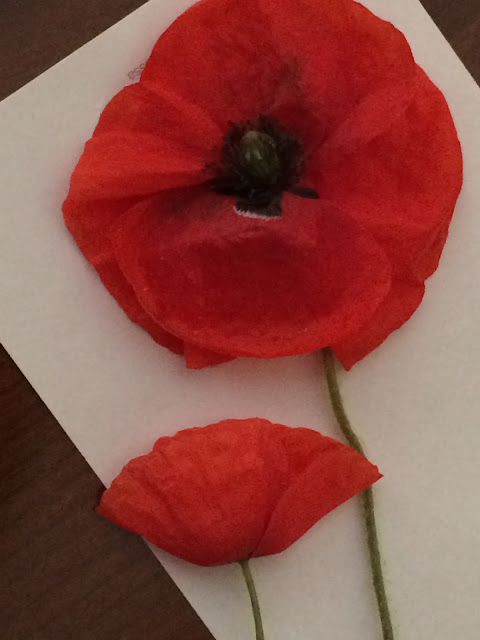 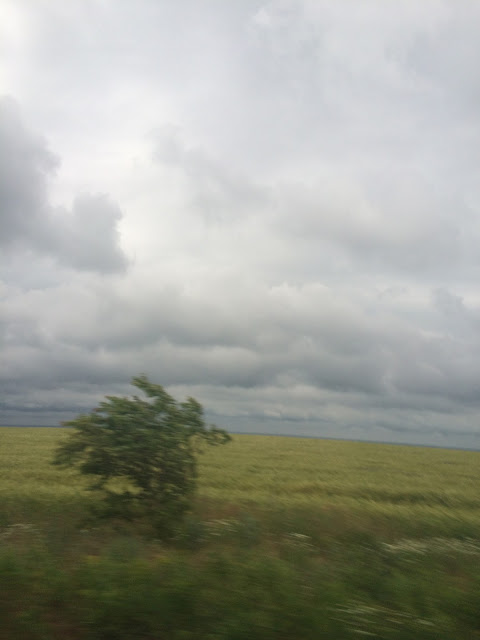 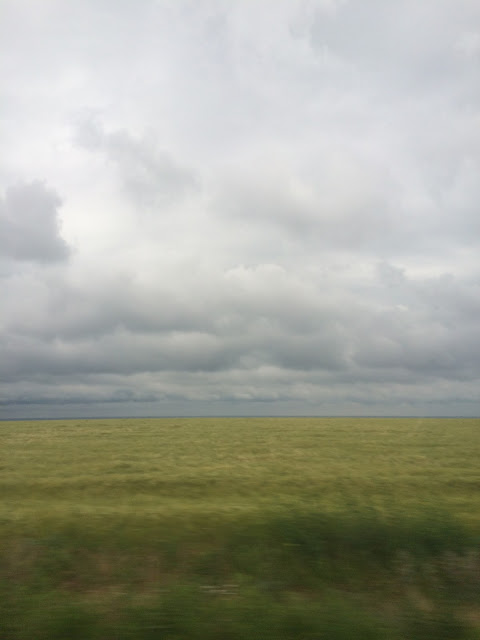