In the spirit of catching up my blog with all my makes, here is another installation.  It will be light on the typing and heavy on the photos, as I am featuring four pieces made over the last two months.  We'll start with my new coat and go from there.  I present you the Watson jacket by Papercut Patterns. It is made from wool I bought in 2011 in Turkey, and some heavy satin from the local fabric store, bough about 6 months ago.  It is underlined with some raincoating that would never be used. 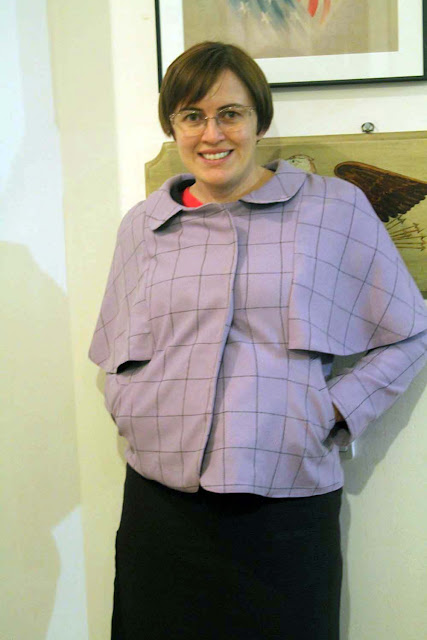 I made a straight size 6 with no alterations.  I did add welt pockets, as it's winter, and you need pockets.  I used the pockets from the Rigel Bomber, but if I were to do it again, I would make the pocket bags a bit bigger.  I did attempt pattern match with various success.  It was a straightforward sew until you get to the shoulders.  They took me a couple of tries, but in the end it turned out alright.  Everything is top-stitched. 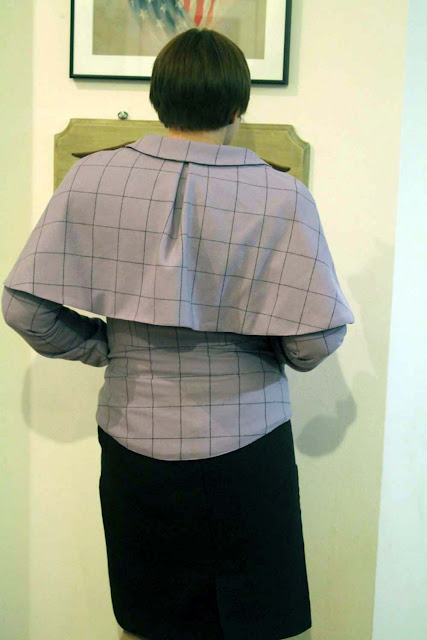 A back view.  So my favorite part is the cape, but it's also my least favorite part.  I feel like it makes my shoulders look super broad, and it's a little unbalanced at the hip. 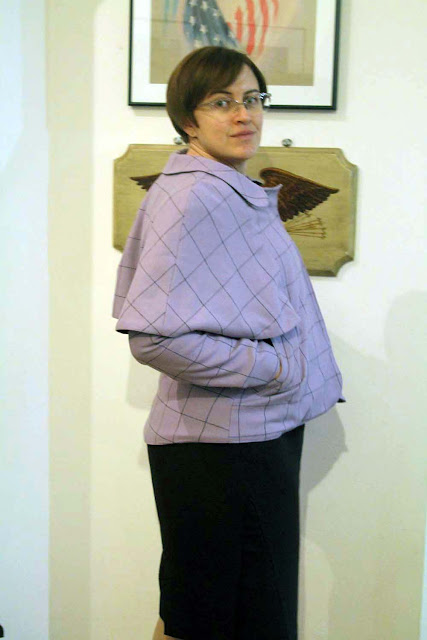 And from the side.  I've worn this coat on and off since I finished it in January.  I prefer my floral coat or my moto-jacket.  My guess is I'll make another winter coat next year, and see if I like it better.  The cape does mean it's pretty warm without a lot of bulk.  Moving on. 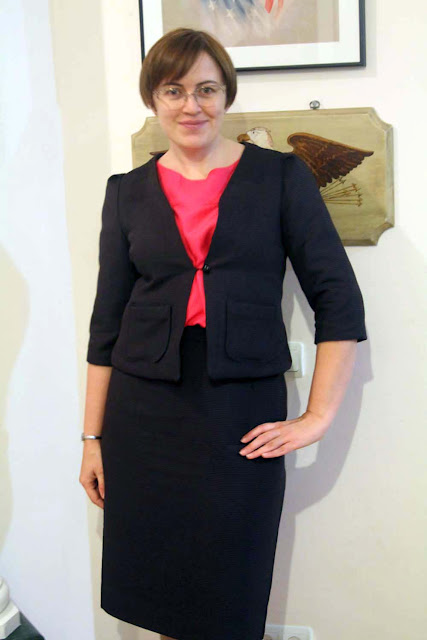 A Chanel style jacket with matching pencil skirt.  I have learned a new Ukrainian word this month- Chanelka is what they call Chanel style jackets.  I love it, and plan on incorporating it into my everyday vocab.  Both of these are TNTs, so they should have been easy makes.  But the fabric was terrible to work with.  You cannot tell in this picture, but there are a kajillion mini-pleats in the fabric.  I bought it at the same time as the mustard boucle from Gorgeous fabrics. 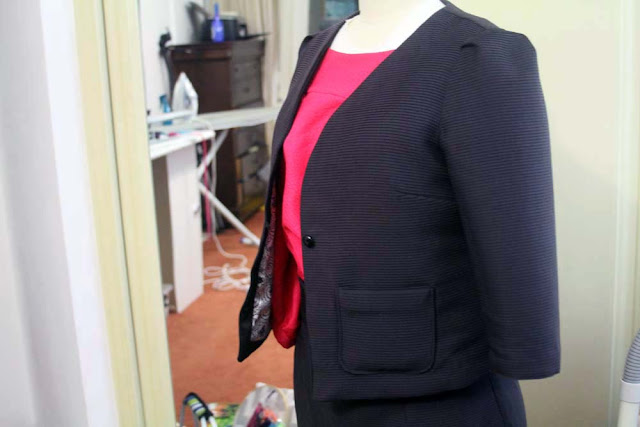 Here is a closer look at the jacket, where you can see the pleating.  I kept both skirt and jacket simple, knowing that the fabric would be tough, and wanted to make sure the lines matched up.  The jacket is Simplicity 1699 with patch pockets added, and darts added in the back.  I narrowed the shoulders by 1.25 inch and made it into a v-neck.  I was going to use the fabric as trim in the front, but decided against it.  Editing is good. 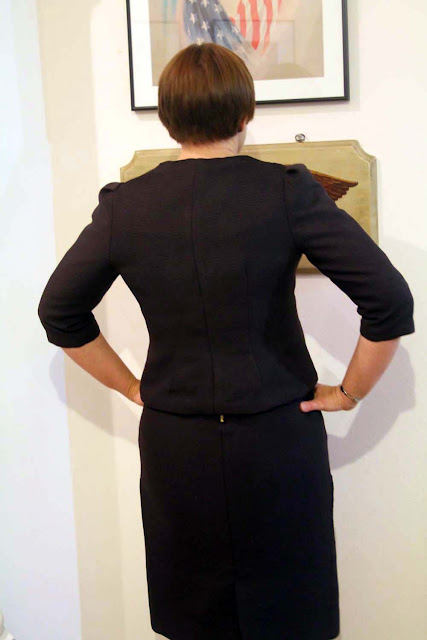 The skirt is my single seam pencil skirt.  You can see my exposed brass zipper peaking out at the bottom.  The fabric was terrible to iron flat, so my usual invisible zipper was impossible to insert. 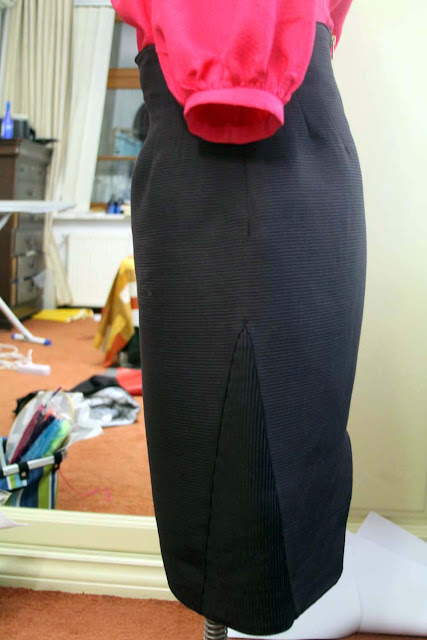 I decided to play with the direction of the pleating, by adding triangles of it vertical on both sides.  It's subtle, but turned out not too bad.  It was a pita to sew. Alright, now on to the last piece of clothing. 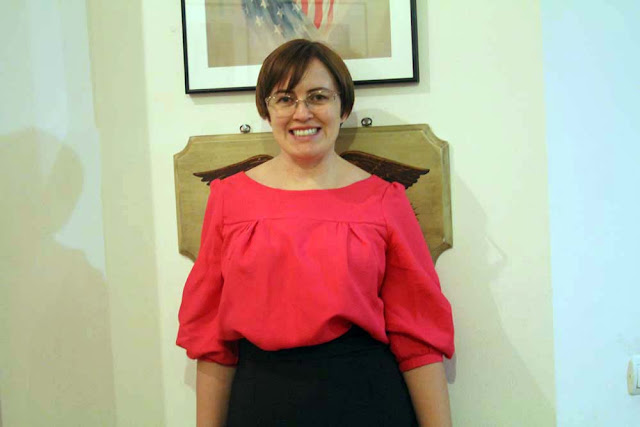 The Mathilde top, by Tilly in the Buttons.  I used a wool silk blend by Carolina Herrera, which I picked up from Mood in one of their half-off sales back in November 2014.  It was a pleasure to sew with, as it was textured, so not slippery at all.  I made multiple changes to the pattern, most notably changing the pintucks to gathers. 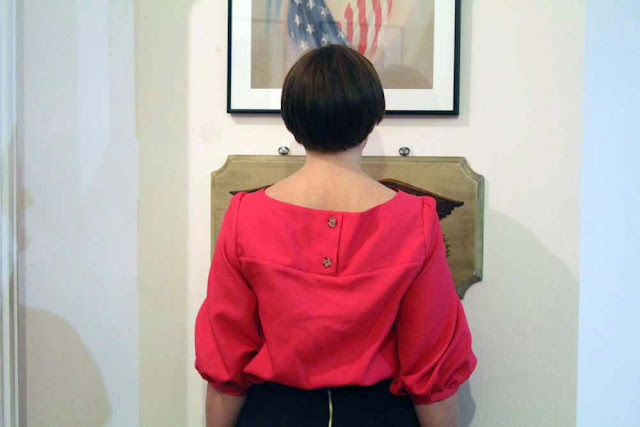 I also changed the back.  The buttons are supposed to go all the way down, but I really wanted just a yoke with buttons.  I also eliminated the facings by cutting two of each the front and back pieces.  It made it a lot easier.  I used french seams throughout.  I am in the process of making a second version, in white.  This time with pintucks.  I also am changing out the sleeves to ones with a little more poof on top and a little less on the bottom. 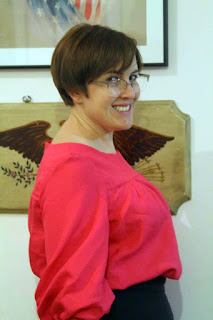 There is a lot of volume with this shirt without the pintucks.  I like it tucked in to my highwaisted skirts, as it shows off the waist quite a bit.  So that's it for today.  I still think I have a two skirts, two pants, and at least one top left to blog.  I have really been prolific in my sewing since December.  On a non-sewing related note, my little guy had some crazy hair today.  He really needs a haircut, but will not sit still for one.  I caught a picture of him, so I'll leave you with that.  Until next time Happy Sewing. 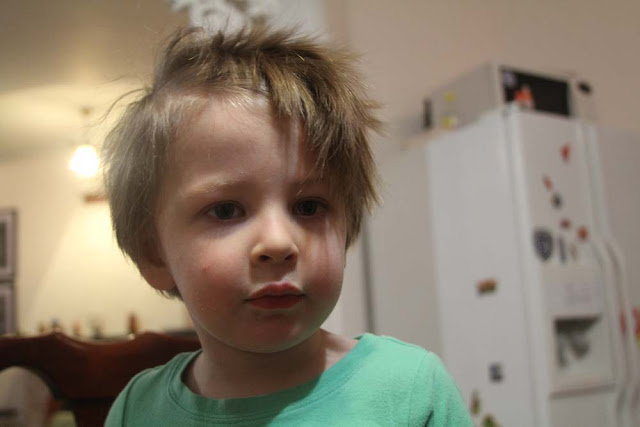